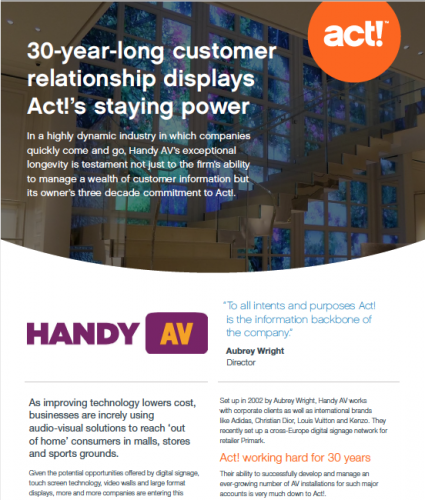 In a highly dynamic industry, in which so many companies quickly come and go, Handy AV’s exceptional staying power is testament to its ability to manage the wealth of customer information flowing through the business.

As improving technology lowers cost, businesses are increasingly using audio-visual solutions to reach ‘out of home’ consumers in malls, stores and sports grounds.

Most fall quickly by the wayside. Those that survive and thrive do so because they can both respond to change in the marketplace, and lead it. One of these market leaders is Handy AV.

Set up in 2002 by Aubrey Wright, Handy AV works with corporate clients as well as international brands like Christian Dior, Louis Vuitton and Kenzo. They recently set up a cross-Europe digital signage network for retailer Primark.

Their ability to successfully develop and manage an ever-growing number of AV installations for such major accounts is very much down to Act!

“To all intents and purposes Act! is the information backbone of the company,” explains Aubrey Wright, “because it brings together our internal and external sales teams as well as accounts. We just wouldn’t be organised without it.”

And because it can provide detailed, up-to-date, insightful information when it’s needed, Aubrey has made Act! his first choice CRM for the past 30 years, and not just with Handy AV, but two other businesses.

So, given his long-term connection with Act! and his hands-on experience as one of its development partners, Aubrey is better qualified than most to comment on how this CRM software has progressed over those three decades.

“Act! was obviously a very different animal back in the mid-1980s,” says Aubrey. “Then, of course, it was more of a content management database than the powerful CRM it is today. Processing power and therefore functionality were limited, and of course it was MS-DOS-based.”

A note for younger readers. MS-DOS was the ‘disk operating system’ developed by Microsoft and was the standard OS for IBM-compatible personal computers before the age of Windows.

Aubrey recalls the software’s evolution from those early days, the switch to Windows, the ability to link to a Word document you could then print out and send as a letter to clients, and then fax integration in the early ‘90s.

“Now of course, you have e-marketing,” says Aubrey, “and cloud-based systems,” something that gives his team the flexibility to work from anywhere.

As with most organisations, it’s Act!’s ability to save time and effort across the board that generates the real productivity gains on a day-to-day basis. Like having standardised templates for everything including invoices, pro formas and dispatch notes.

But it’s being able to enter customer data quickly and easily, then retrieve it fast, that really makes a difference.

“Having a central database of up-to-the minute customer information you can rely on, means anyone can pick up on someone else’s accounts if they’re not around,” says Aubrey. Something, as he points out, that’s more likely to happen now than it used to, because employees generally have far more holidays than they did 30 years ago.

Aubrey finds two of Act!’s features particularly useful. Reporting, which he thinks is much under-used by many companies, and Opportunities.

“Opportunities is one of the biggest improvements in Act!,” he says, “because it lets you record and track information very proactively. It’s like an advance warning system. For instance, sales managers can use it to check on the progress of a project, and if it’s stalled, they can quickly focus on getting it moving forward again. It’s tremendously useful for managing the corporate flow of information through the company.”

A glimpse of the future

Aubrey’s enthusiasm for Act! is self-evident, but has he ever considered another CRM system?

“Of course, we always ask new staff about their experiences with other systems to see if any have something extra to offer,” says Aubrey. But the fact that Handy AV has just upgraded to Version 19 of Act! means that as yet no one has been able to suggest a better alternative to him.

Looking forward, Aubrey continues to see new opportunities with retailers, and in the corporate sector, particularly financial. And of course, there are the large format screens at stadia showing highlights, and pitch-side advertising.

With plans to expand, Handy AV will soon be extending their 10 user licence and looking to better integrate Act! with the company’s Sage accounts system.

But, as Aubrey talks about how Act! can be the core program of a business into which other systems feed documents, spreadsheets, pdfs, webpages and the like, he suddenly has a glimpse of the future.

“What if you could link Act! to Skype and other collaborative tools for web conferences,” muses Aubrey, “that would be good.”

Given retailers’ growing demand for ever more engaging AV experiences, you can certainly see how that would come in Handy.