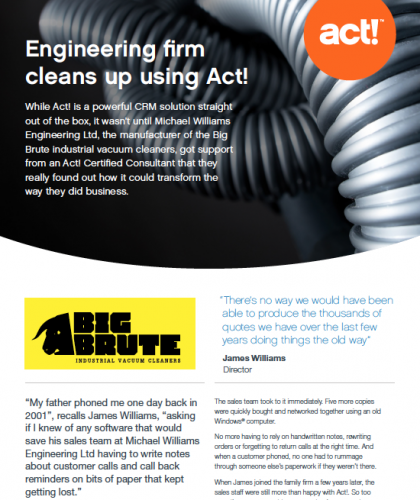 “My father phoned me one day”, recalls James Williams, “asking if I knew of any software that would save the sales team at his engineering firm having to write notes about customer calls and call back reminders on bits of paper that kept getting lost.”

James didn’t. But, quite by chance, he spotted Act! on a shelf in PC World soon after. He thought “it might do the job” and bought a copy.

The sales team took to it immediately. Five more copies were quickly bought and networked together using an old Windows computer.

No more having to rely on handwritten notes, rewriting orders or forgetting to return calls at the right time. And when a customer phoned, no one had to rummage through someone else’s paperwork if they weren’t there.

That was in 2001. When James joined the family firm a few years later, the sales staff were still more than happy with Act!. So too were the management team, as not only were customers getting a better service, but production scheduling had also improved because they knew where business was coming from and when.

“We thought we were using Act! to the full,” says James. “Then we had an Act! Certified Consultant come in. That opened everyone’s eyes to what was possible. Straightaway, for instance, we realised we weren’t using Opportunities to manage leads. After some training, we immediately went to another level.”

The business expanded, selling more and more of its industrial vacuum cleaners to customers not just in the UK, but also to Europe, and as far afield as Australia and New Zealand.

“Then Jenny Upson of Project Support (another ACC) came in to reconfigure Act! for us,” says James. “She revolutionised things even more. She introduced us to Seamless Opportunities (an Act! add-on), which reinvented the way we prepared quotes. Until then, we’d been using Word, but there was no consistent style or corporate feel, and often the figures were wrong.

“With Seamless Opportunities, suddenly we were producing better-looking quotes, faster and more accurately. There’s no way we would have been able to produce the thousands we have over the last few years doing things the old way.”

Jenny also helped them to set up web access, so their sales demonstrator could use a laptop and dongle to upload and access notes while in the field or working from home. This meant that the team back at Williams Engineering’s offices in Cambridge had information they would otherwise have had to wait days for.

Has the company ever thought about using another CRM? James admits to contemplating a move to Sage, to coordinate with their accounting system.

“But it was far too complicated. It might be OK for a massive multinational,” says James, “but Act’s much better for a smaller company like us.”

In fact, knowing what Act! can do, Williams Engineering has persuaded its distributors in Australia and New Zealand to start using it too, passing on their knowledge and helping customise the software.

With the company just starting to export to the US and Canada, the company is taking on a marketing apprentice and an external marketing advisor to help build their presence at exhibitions through the year. And Act! will play an important role in this by making sure the information that is collected is fully used for marketing after events.

They will also be using Act! emarketing more over the next 12 months. They’ve already used it to get customer feedback about the company’s ‘Bangalore birdscarer’. This is one of their traditional products, which they were thinking of dropping until the overwhelmingly positive response of customers led them to think again. An updated version will go into production later this year.

It seems the moral of this story is that even if you have been using it for some time, Act! is probably more powerful than you think – you just may need a helping hand to unlock it.