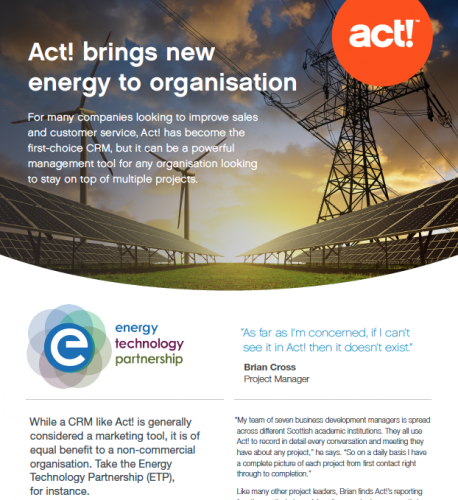 For many companies looking to improve sales and customer service, Act! has become the first-choice CRM, but it can be a powerful management tool for any organisation looking to stay on top of multiple projects. While a CRM like Act! is generally considered a marketing tool, it is of equal benefit to a non-commercial organisation. Take the Energy Technology Partnership (ETP), for instance.

This alliance of twelve Scottish universities carries out world-class research and development across a range of energy-related technologies, including wind, marine, solar and carbon capture. With some 250 academics and 600 researchers involved, it’s the largest research partnership of its kind in Europe.

Brian Cross is the project manager. At any one time, he’s juggling 120-130 projects, all at different stages … something he’s able to do using Act!.

“My team of seven business development managers is spread across different Scottish academic institutions. They all use Act! to record in detail every conversation and meeting they have about any project,” he says. “So on a daily basis I have a complete picture of each project from first contact right through to completion.”

Like many other project leaders, Brian finds Act!’s reporting function particularly useful, as it means he knows exactly how many companies ETP is talking to about projects at any one moment, and where they are in the process. He can then generate up-to-the-minute progress reports on exactly what is in the pipeline.

“In effect, what Act! gives us,” says Brian, “is not far off an audit trail that shows our funders, like Scottish Enterprise, what we are doing at any one time.”

Undoubtedly Act! helps make Brian and his team more productive by saving them time and effort. However, it’s by bringing much better organisation that Act! has probably been of greatest benefit. So much so that after less than 12 months of Act! being in place, Brian’s Executive Director was able to say that ETP was running better than ever before.

That doesn’t mean there isn’t a commercial imperative at work, as ETP needs to make sure all available funding is allocated on time. Thanks to Act!, not only do they have the clear picture of their project pipeline needed to do that, but they can also keep tabs on a whole range of project parameters. For instance, how many new jobs are being created through project funding, or whether the turnover of the company has increased, all things that are easy to attach to a particular project using Act!.

Act!’s greater usability is also much appreciated by Brian who, in a 30-year-long career in the sector, has used various CRMs, like Microsoft Dynamics, which he found “very complicated to set up and use.”

Fortunately, with Act! he feels he now has a CRM that’s not only much more user-friendly, but which he can personalise in ways that weren’t open to him with other programs. So, while he might have achieved acceptable results with Microsoft Dynamics, as he says: “People appreciated what they got, but they didn’t understand how much effort went into producing what they were seeing.”

Since joining ETP Brian has focused on helping his team get the most out of Act!. That has required a mixture of his own enthusiasm for what the software can do, but also what he calls “mild pressure” to ensure that his business managers are inputting data consistently and using the correct methodology. That’s very important to him.

“I tell people that although they aren’t in a sales organisation, they need to work with the same rigour as if they were,” he says. “Many people think of CRM as passive,” says Brian, “but if you want to get the best out of it, you have to use it ‘actively’, and not think it will do the work for you. In other words, rubbish in means rubbish out.”

That means, for example, encouraging everyone to update Act! with the latest project details before the team’s monthly meetings. “As far as I’m concerned,” says Brian, “if I can’t see it in Act!, then for me it doesn’t exist”.

With a lot of time spent building his team over the last year, Brian will now start turning his attention to getting even more from Act!, and particularly its e-marketing function. However, after previous experiences trying to integrate other CRMs with email marketing, this is something he’s been rather wary of doing until now. But, as he puts it, “Act!’s e-marketing looks interesting,” so from Brian’s point of view, that means it’s well worth expending energy on.